After 161 years, the SS New York shipwreck had finally been recovered off the Gulf of Mexico. The ship was carrying an incredible treasure hoard of some of the earliest and rarest Gold coins minted in the U.S. Southern Mints. Valued at over $1 million dollars, the U.S. Gold coins will be released to the American public.

The S.S. New York was an elegant 160 foot side-wheel steamship, complete with a wooden-hull and built in its namesake city in 1837. The ship’s polished mahogany walls, white satin damask curtains, engraved Silver, crystal, and fine white porcelain led one passenger to say that she felt like Cleopatra when on board the luxurious ship.

During the majority of her career, the S.S. New York shuttled weekly between Galveston and New Orleans. The ship transported light merchandise, provisions, buffalo hides and cotton, as well as passengers back and forth. Occasionally she was chartered to transport troops to the U.S. Army depot at Brazos Santiago in south Texas in support of the war against Mexico.

In the fateful year of 1846, the S.S. New York set sail from Galveston, Texas at 4pm on September 5th with 53 passengers and crew on board. Captain John D. Phillips maneuvered the rough winds and an even rougher sea the first night out. After barely making 50 miles, the ship found itself in the path of a major hurricane. 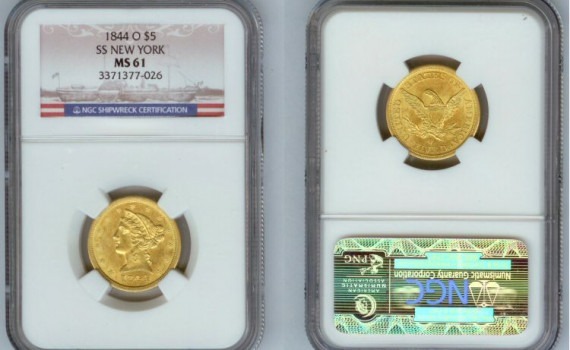 The Captain ordered the anchor dropped to weather out the gale force winds. Unfortunately for the stalled ship, by 2am on September 7th, the winds changed and swung the ship around the wrong direction.

For two long hours the crew tried to turn the ship back into the wind, but giant waves began pelting the ship, carrying off the wheelhouse, the smokestack, and putting out the boiler fires. The ship’s bell rang out one final time before she was lost to sea, sending out the “death knoll” to all who heard it.

Only 36 souls aboard the S.S. New York survived by holding on to ship debris for two days until they were rescued by the S.S. Galveston. The S.S. New York was lost to the sea, taking the lives of 17 people, including five children. Also lost in the shipwreck was some thirty to forty thousand dollars in U.S. Gold coins, U.S. Silver coins, and bank notes as reported in insurance reports and manifests.

Amazingly, the coins on board the S.S. New York were some of the oldest Gold coins struck at the long-closed and little-known Southern Branches of the U.S. Mint. Experts report that the discovery includes some of the finest known Pre-Civil War Half Eagles and Quarter Eagles in the world. Recovered from this historic 1846 shipwreck were coins struck during America’s first Gold rush starting in 1803 in the Blue Ridge Mountains of North Carolina and during the next Gold rush in the Cherokee hills of Georgia in 1828. 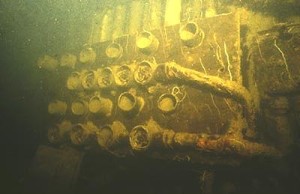 The recovered treasure also includes $10 Gold Eagles, as well as the $2.50 and $5.00 pieces issued by the Southern Mints of New Orleans, Charlotte, NC and Dahlonega, GA. These coins bear the mint marks of O, C, and D respectively and enjoy a strong base of American collectors. The latest reports are that some $10 Eagles were minted in New Orleans and others in Philadelphia. (Coins from the Philadelphia bear no mint mark.)

In 1846, news of the shipwreck was lost among stories of the Mexican-American War battles. Let’s put the shipwreck in its historical context. The Republic of Texas had only become a state a few months before the shipwreck. Texas was still America’s wild western frontier and settlers were still fighting Indians. There were few newspapers those days and the mail moved slowly by stagecoach. With the vast distances and the relatively low loss of lives, news of the shipwreck of the S.S. New York received little fanfare. Far more men were dying on the battlefields as America fought to defend Texas.

As a result, this was a shipwreck that was apparently overlooked by salvage firms. It wasn’t until 144 years after the shipwreck that a Louisiana oil field worker and an amateur diver read a newspaper article about the sunken ship and decided to start looking for it. As unlikely as it seems, the oil field worker used his electronic fish finder equipment and research gained from shrimpers in the area, to find the exact location of the shipwreck. For many decades, maps of the area in the Gulf of Mexico labeled an area in the water that was dangerous to dragging shrimp nets as “snag.” The snag proved to be the remains of the 160 foot steamer’s paddlewheel, smokestack, and heavy boilers.

The discovery of the S.S. New Yorker shipwreck led to excitement at the prospect of finally recovering some of the lost Gold and Silver coins minted before 1846. No doubt, the coins around the shipwreck would be worth a small fortune, sure to be highly prized by coin and shipwreck artifact collectors alike. At first, a contractor was hired to remove all of the sand from the hull of the ship, but barely any coins were found. Luckily, the oilfield worker appreciated the historical significance of the site and would not allow the contractor to demolish the wreck. Divers again examined the site in 1997 and 1998, but no one was able to find the lost Silver and Gold coins. 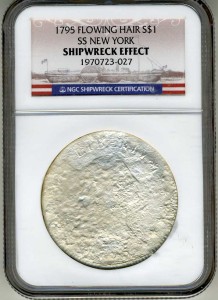 Finally, in 2007 the remains of the S.S. New York were explored again by the original discoverers in a full-scale salvage operation. Craig DeRouen, Avery Munson, and Gary and Renee Hebert (pronounced “a-bear” in Louisiana) had wisely obtained rights to the shipwreck from a federal court, including ownership of all the rare and valuable coins that might be rescued. The operation proved to be quite a success for the treasure hunters, the coins were finally uncovered and carefully brought to the surface.

Thankfully, Gold coins resist corrosion by saltwater and the rare coins from the Charlotte, Dahlonega, and New Orleans Mint were well preserved, some in high “Mint State” condition. A few of the coins have been appraised as “the most impressive Southern-minted Gold known to exist.”

Even the U.S. Silver coins will be highly collectible despite the fact that Silver coins are often etched by seawater. NGC denotes such coins as having a “Shipwreck Effect” rather than assigning them a specific grade. In recent years, these shipwreck coins have become highly prized among collectors and investors who appreciate the history, rarity, and exclusivity of owning coins with such an amazing pedigree.