On 3 September 1857, 477 passengers and 101 crew left the Panamanian port of Colón, sailing for New York City under the command of William Lewis Herndon. The ship was heavily laden with 10 tons of Gold prospected during the California Gold Rush. After a stop in Havana, the ship continued north. 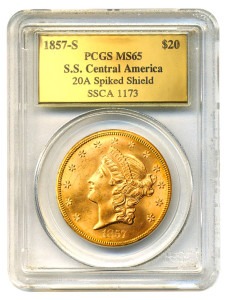 On 9 September, the ship was caught up in a Category 2 hurricane while off the coast of the Carolinas. By 11 September, the 105 mph winds and heavy surf had shredded her sails, she was taking on water, and her boiler was threatening to go out. A leak in one of the seals to the paddle wheels sealed her fate, and, at noon that day, her boiler could no longer maintain fire. Steam pressure dropped, shutting down both the pumps keeping the water at bay and the paddle wheels that kept her pointed into the wind as the ship settled by the stern.

The passengers and crew flew the ship’s flag upside down (a universal sign of distress) to try to signal a passing ship. No one came.A bucket brigade was formed and her passengers and crew spent the night fighting a losing battle against the rising water. During the calm of the hurricane, attempts were made to get the boiler running again, but these all failed. The second half of the storm then struck. The ship was now on the verge of foundering. Without power, the ship was carried along with the storm, so the strong winds would not abate. The next morning, two ships were spotted, including the brig Marine. 153 people, primarily women and children, managed to make their way over in lifeboats. However, the ship remained in an area of intense winds and heavy seas that pulled the ship and most of her company away from rescue and eventually took the ship and many of the roughly 425 people still on board to the bottom at around 8 pm that night.

A Norwegian bark, Ellen, rescued an additional fifty from the waters. Another three were picked up over a week later in a lifeboat.At the time of her sinking, the Central America carried Gold then valued at approximately $2 million dollars. The loss shook public confidence in the economy, and contributed to the Panic of 1857.

Commander William Lewis Herndon, a distinguished officer who had served during the Mexican-American War and explored the Amazon Valley, was captain of the Central America. Commander Herndon went down with his ship. Two US Navy ships were later named USS Herndon in his honor, as was the town of Herndon, Virginia. Two years after the sinking, his daughter Ellen married Chester Alan Arthur, later the 21st President of the United States.

Several books were written about this historic ship. One book is America’s Lost Treasure, a pictorial chronicle of the sinking and recovery. Gary Kinder’s Ship of Gold in the Deep Blue Sea is an account of the rec

Lost for 131 years, the Central America shipwreck is a unique time capsule of information and artifacts of an era in which the very character and spirit of America blossomed overy efforts. 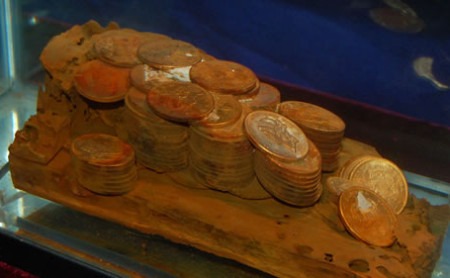 The ship was located by the use of Bayesian search theory and a remotely operated vehicle (ROV) operated by the Columbus-America Discovery Group of Ohio, that was sent down on 11 September 1987. Significant amounts of Gold and artifacts were recovered and brought to the surface by another ROV built specifically for the recovery. Tommy Thompsonled the group. 39 insurance companies filed suit, claiming that because they paid damages in the 19th century for the lost Gold, they had the right to it. The team that found it argued that the Gold had been abandoned. After a legal battle, 92% of the Gold was awarded to the discovery team in 1996.

The total value of the recovered Gold was estimated at $100–$150 million. A recovered Gold ingot weighing 80 lbs. sold for a record $8 million and was recognized as the most valuable piece of currency in the world at that time.