The New Orleans Mint operated from 1838 to 1861 and from 1879 to 1909. During its years of operation, it produced over $427 million Gold and Silver coins of nearly every American denomination, with a total face value of over $307 million. It was closed during most of the American Civil War and Reconstruction.

The New Orleans Mint has been designated a National Historic Landmark, and is currently the oldest surviving structure to have served as a U.S. Mint. Along with the Charlotte Mint, it is one of two former mint facilities in the United States to house an art gallery.

The city of New Orleans, Louisiana has been an important commercial center since it was founded in 1718 along the banks of the Mississippi River, near the Gulf of Mexico. This fact was reinforced when the U.S. Federal Government established a branch mint there on March 3, 1835, along with two other Southern branch mints at Charlotte, North Carolina and Dahlonega, Georgia.

New Orleans’ strategic location along the Mississippi River made it a magnet for commercial activity. Large quantities of Gold from Mexico also passed through its port annually. In the early 19th century, New Orleans, which was the fifth-largest city in the United States until the Civil War, conducted more foreign trade than any other city in the nation. It was also located relatively near to Gold deposits recently discovered in Alabama. While the Philadelphia Mint produced a substantial quantity of coinage, in the early 19th century it could not disperse the money swiftly to the far regions of the new nation, particularly the South and West. In contrast to the other two Southern branch mints, which only minted Gold coinage, the New Orleans Mint produced both Gold and Silver coins, which arguably marked it as the most important branch mint in the country.

The New Orleans Mint operated continuously from 1838 until January 26, 1861, when Louisiana seceded from the United States:

On January 29, the Secession Convention reconvened at New Orleans (it had earlier met in Baton Rouge) and passed an ordinance that allowed Federal employees to remain in their posts, but as employees of the state of Louisiana. In March, Louisiana accepted the Confederate States Constitution, and the Confederate government retained all the mint officers. They used it briefly as their own coinage facility. The Confederates struck 962,633 of the 2,532,633 New Orleans half dollars dated 1861. Research suggests that 1861-O half dollars bearing a bisected date die crack (“WB-103”) and 1861-O half dollars with a “speared olive bud” anomaly (“WB-104”) on the reverse had been minted under authority of the Confederacy. The Confederates designed alternate reverse dies which they used to strike their own half dollars in New Orleans. The exact number of half dollars struck by the Confederates with the alternate reverse is unknown; only four of the Confederate coins are known to exist today. One of them, which was recently sold at auction for a large sum, was once owned by Jefferson Davis, the only President of the Confederacy. They continued this process from April 1 until the bullion ran out later that month. The staff remained on duty until May 31. After that, the mint was used for quartering Confederate troops until it was recaptured along with the rest of the city the following year largely by Union naval forces under the command of admiral David G. Farragut.

The mint reopened as an assay office in 1876. Its machinery was evidently damaged during the war, but because of its importance, unlike the mints at Charlotte and Dahlonega, in 1877 U.S. Mint agent James R. Snowden asked the superintendent of the office, Dr. M. F. Bonzano, to report on the condition of the facility for minting. Upon receipt of Bonzano’s report, new minting equipment was shipped to New Orleans.

The building was refurbished and put back into active minting service in 1879, producing mainly Silver coinage, including the famed Morgan Silver dollar from 1879 to 1904.

The refurbishment and re-commissioning of the New Orleans Mint was due partly to the fact that in 1878 the Federal government in Washington, D.C. had passed the Bland-Allison Act, which mandated the purchase and coining of a large quantity of Silver yearly. The Treasury Department needed additional facilities to do so. It reopened the New Orleans facility primarily to coin large quantities of Silver dollars, most of which were simply stored in the building instead of circulated. President Rutherford B. Hayes appointed former Mississippi Senator and governor Henry S. Foote the new superintendent of the mint. 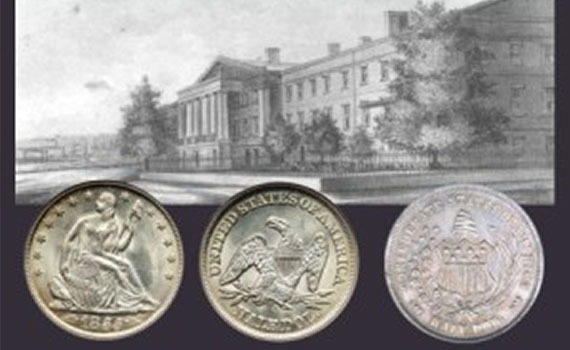 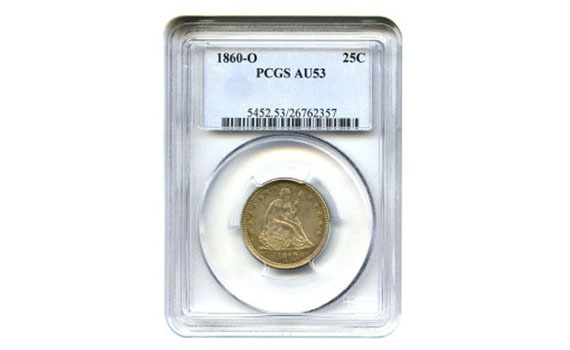 During this second period of operation, the Mint also struck dimes, quarters, half dollars, $5 half eagles, $10 eagles and, in 1879 only, 2,325 double eagles. It should also be noted that the New Orleans Mint was used by the Federal authorities in 1907 to coin over five and a half million Silver twenty-centavo pieces for the Mexican government as part of the American government’s program of producing foreign coinage. The New Orleans Mint, whose coins can be identified by the “O” mint mark found on the reverse of its coinage, earned a reputation for producing coins of a mediocre quality; their luster is usually not as brilliant as those of other mints, and center areas tend to be flattened and not sharply struck. Thus, well-struck New Orleanian coinage is prized in the numismatic world today.